Biogents’ mosquito traps were invented by scientists who have been doing research on the behaviour of mosquitoes and other blood-sucking insects for over 16 years. Biogents mosquito traps are not only used worldwide by professionals, healthcare experts, researchers and private customers but also mentioned in more than 400 scientific publications.

Useful applications and a number of patents have resulted from sound fundamental research at the University of Regensburg. Capture devices originally built for fellow researchers and specialists have evolved into fully developed products within a short period of time. All trap types are based on the same patented technology and differ only in design.

The trap type for researchers, the BG-Sentinel, already became one of the leading traps for monitoring tiger mosquitoes and other species within just a few years after its invention in 2004. A steadily growing number of independent scientific publications reviewed by experts supply impressive evidence of the widespread use of Biogents traps. E.g., a study in Cesena, Italy, shows a reduction of mosquito nuissance up to 85 % in areas with Biogents traps, see below.

Online database with publications on studies using the BG-Sentinel >

The growing spread of the invasive mosquito species Aedes aegypti (L.) and Aedes albopictus (Skuse) increases the complexity of mosquito control. In contrast to several other mosquito species that are found in the home environment, such as the house mosquito Culex quinquefasciatus, the container-inhabiting tiger mosquitoes are day-active. Adulticidal operations at daytime are not feasible and reaching all breeding sites in larviciding operations is practically impossible. Many home owners use mosquito traps to reduce mosquito populations in their backyards. Several traps with different attraction mechanisms and price categories are commercially available, but most of these traps were not scientifically proven to be effective.

The Biogents BG-Sentinel trap has been used by researchers all over the world for over a decade to monitor dengue vectors and is generally recognized as the gold standard mosquito trap for yellow fever and Asian tiger mosquitoes. The trap uses the BG-Sweetscent, an artificial human skin scent that contains lactic acid. The BG-Sentinel can additionally be operated with CO2 to increase catch rates and species spectrum. The commercially available BG-Mosquitaire trap uses the same mosquito attraction and collecting mechanisms as the BG-Sentinel, but instead of being lightweight and collapsible for scientific or public health purposes, it was designed to be more robust and visually pleasing, for use in fixed positions throughout the whole mosquito season in backyards, restaurants, hotels, and similar locations.

2) Is the commercially available BG-Mosquitaire trap as good as the professional BG-Sentinel trap?
Yes, there was no statistical difference between the Ae. aegypti and the Culex quinquefasciatus catch rates of the two traps, neither when tested with (Fig. 2 A), nor without CO2. 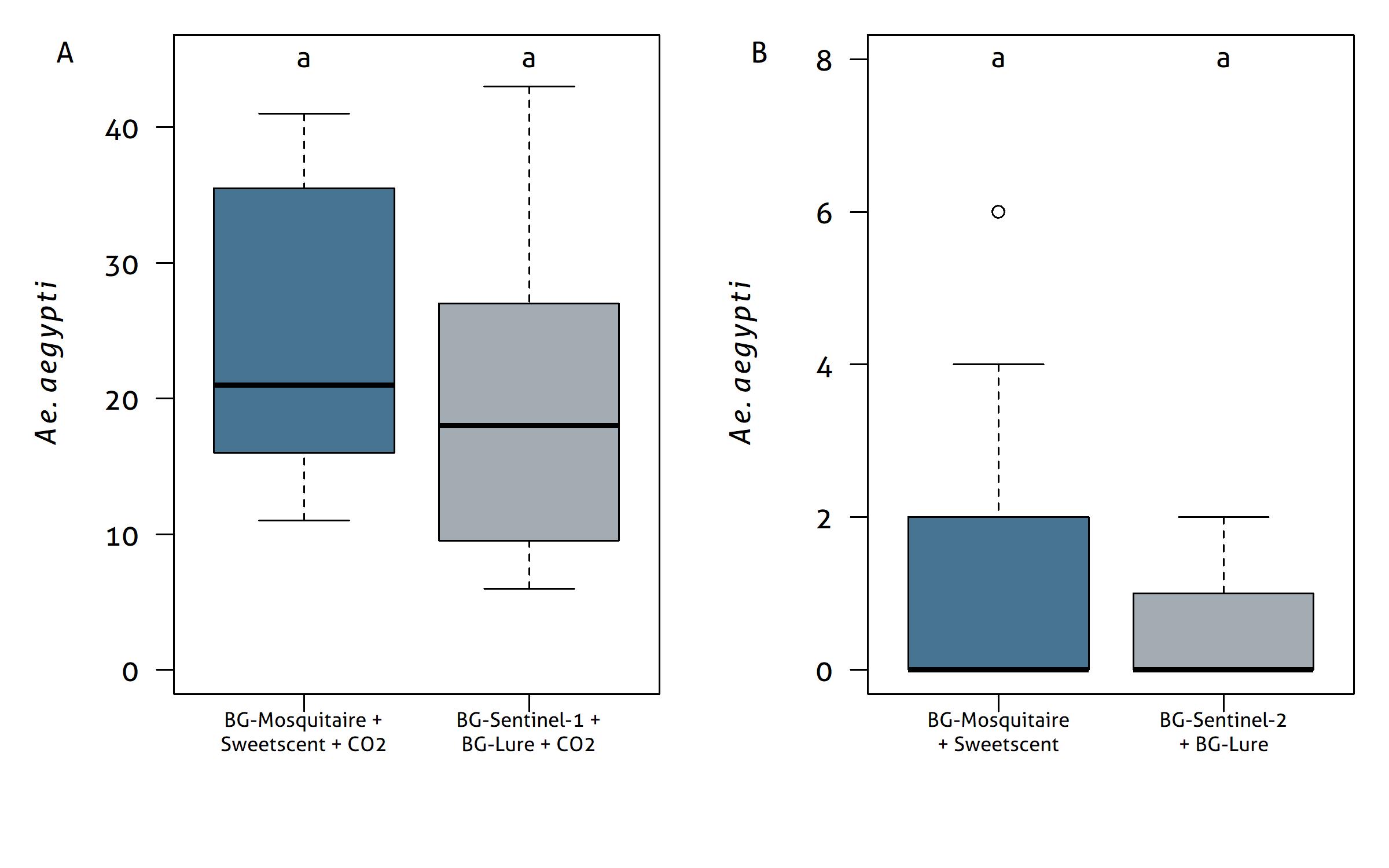 Fig 2. Boxplots of Aedes aegypti (female and male) catches in BG-Mosquitaire and BG-Sentinel traps (A) in Clovis,CA, and (B) New Orleans. The same letters indicate insignificant different catch rates. 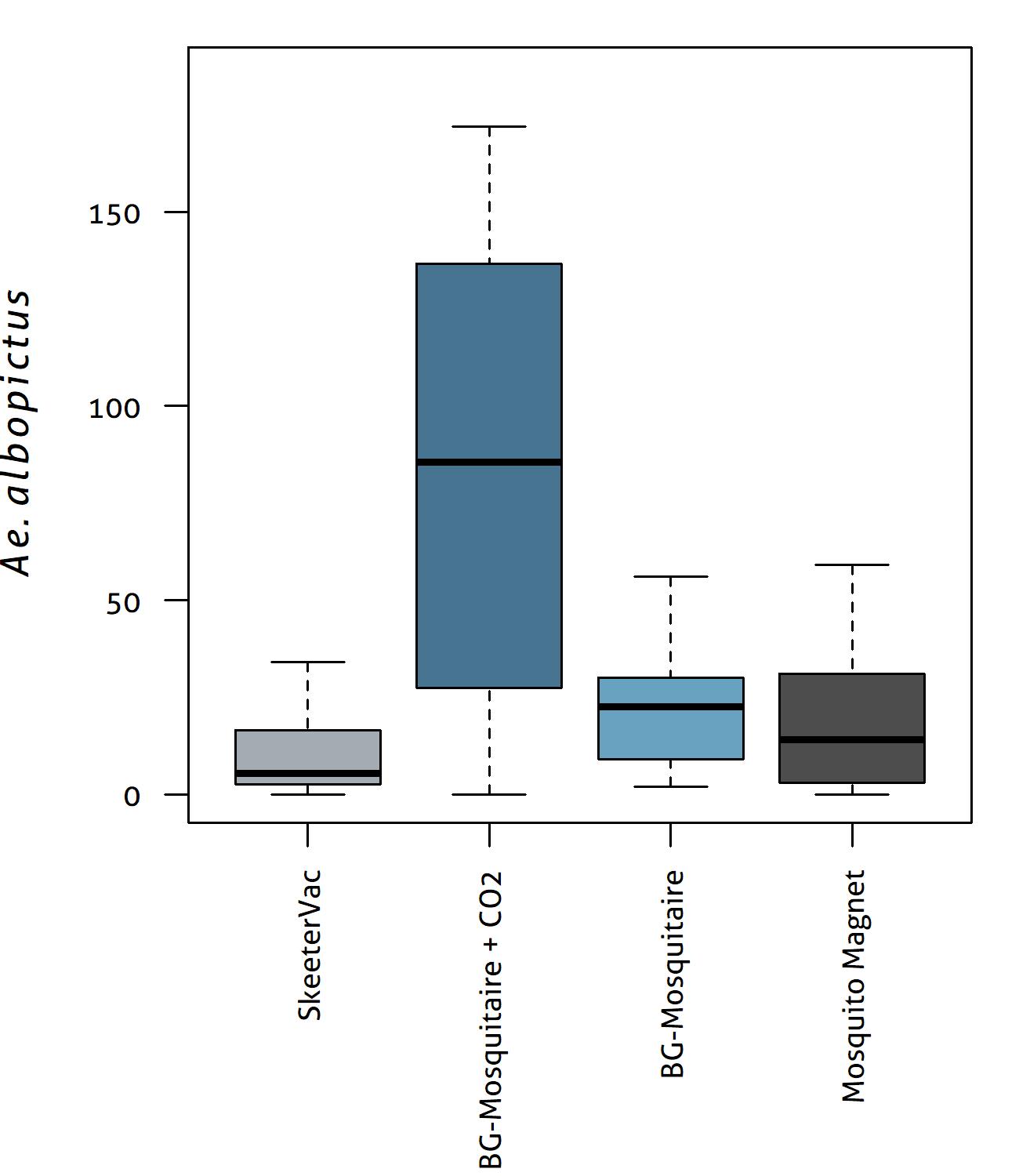 Fig. 3. Boxplots of (A) Aedes albopictus (female and male) in 4 different mosquito traps in Lake Charles, LA. Please note that 2 outliers (302 and 523 Ae. albopictus in the BG-Mosquitaire+Sweetscent+CO2) are not shown in order to facilitate visual comparison between boxes. Different letters indicate significantly different catch rates.

Government-led programs to control dengue have often failed. Urban Aedes mosquitoes such as the yellow fever mosquito Ae. aegypti and the asian tiger mosquito Ae. albopictus mainly breed in small containers on private properties. They therefore seem to be great species to be targeted by control programs that strongly rely on citizen participation.

The town of University Park, MD, USA used the BG-GAT traps in a citizen-based mosquito control intervention. The town is highly infested with Ae. albopictus and comprises approximately 1000 residential yards. The approach named Citizen Action through Science (Citizen AcTS) is based on citizen volunteers that are mentored by scientific advisors. Residents were encouraged to purchase two BG-GAT traps (one for the front- and one for the back yard). Each block of houses had a community leader that informed their neighbors about the initiative. Every participant was responsable for the installation and maintenance of the purchased traps.

Almost the half of the town’s residential yards (439 of 954) were equipped with GATs. Results indicate effective mosquito control, however the reduction of mosquito nuissance was significantly higher in blocks, where more than 80% of households used GAT traps (Fig. 1).

Three houses with garden were treated with a network Biogents traps that were operated with CO2 and BG-Lure for 3 months during the peak activity season of Ae. albopictus. The average distance between the traps was 5 m. The three treated properties received 9, 13, and 18 traps, depending on their size (Fig. 1a-c). The trap network is called “Bio-Belt Anti-Moustique” and was patented by the French company HBM Distribution SAS.

Fig 1: Biobelt traps installation in the treated houses. a-c Spatial schematic depiction of the array of the “belt” of traps around three treated houses, prospected in the area Modules- traps are shown in green. The area protected by the barrier is hatched 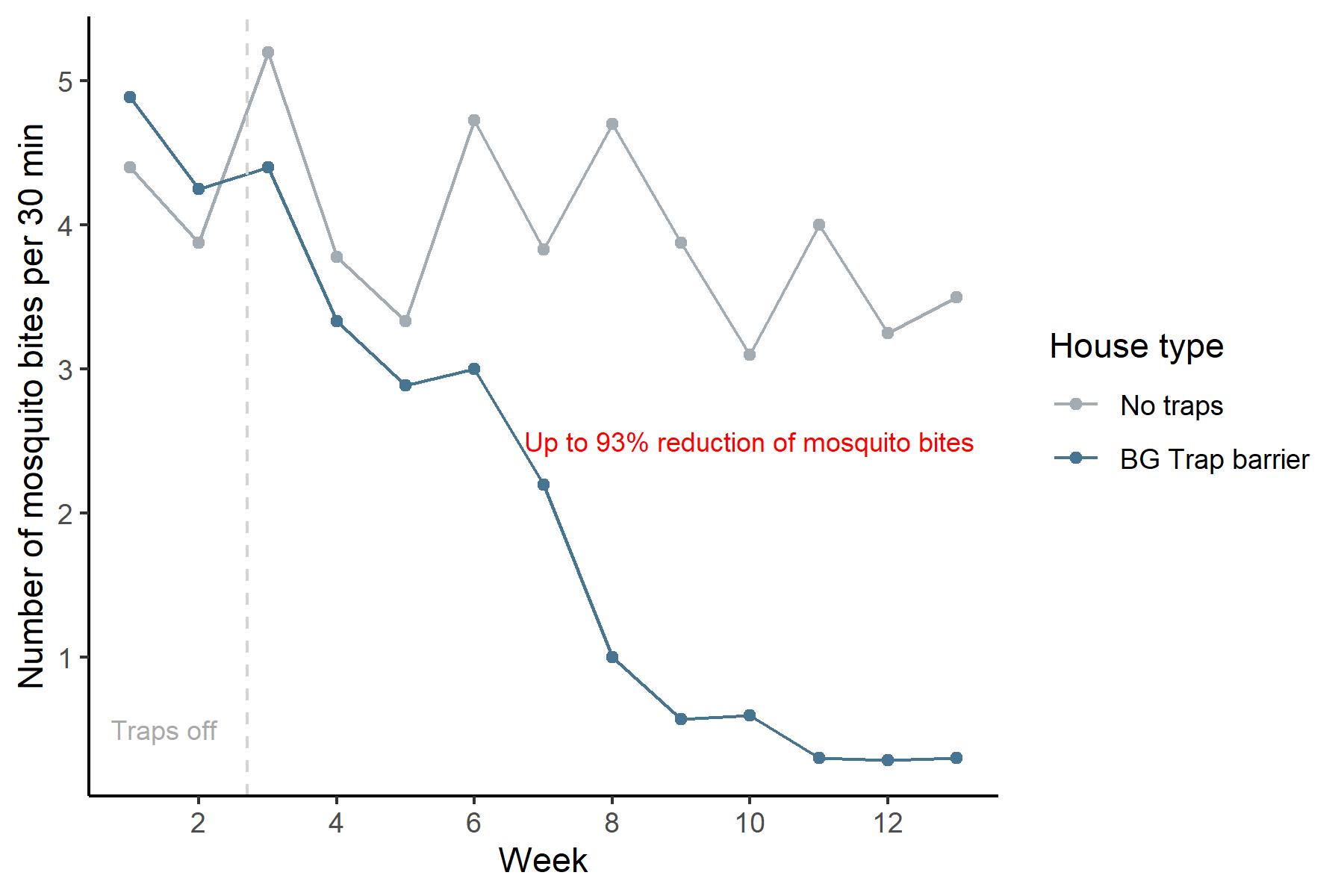 In Europe, Italy is one of the countries, that are heavily infested with the day-active Asian tiger mosquitoes (Aedes albopictus). This study showed that it is possible to reduce biting rates and local populations of Aedes albopictus in Cesena, Italy, by using Biogents suction traps:

For the experiment, 3 small intervention sites with different characteristics were selected: a) single-family house surrounded by a garden, b) area dominated by apartment houses, c) cemetery. The mosquito biting pressure in outdoor areas of the three areas was compared to those in three untreated similar environments by human landing collections (the lower legs of an investigator were exposed to mosquitoes, and landing mosquitoes were collected, identified and counted). The study duration was 16 weeks from June to October. From the beginning of the study, the biting pressure was lower in areas with Biogents suction traps, but after 5 weeks, the effect of trapping on mosquito nuisance became more evident. Over the course of the whole study, an average of 11.2 Ae. albopictus per hour were collected by human landing collections in areas without Biogents traps, while only an average of 1.4 Ae. albopictus per hour were collected in areas with Biogents traps. This means, that the overall biting pressure in intervention areas was reduced by 87% (Fig. 1).

Aedes aegypti, the main vector of viral diseases such as dengue, Zika and chikungunya, is highly adapted to urban areas. Routinely employed dengue vector control strategies, that usually consist of the reduction of breeding sites and application of insecticides, have failed to control virus transmission in most settings, including Brazil. This long-term study shows that Biogents suction traps can reduce the abundance of Aedes aegypti in urban settings. The study that was co-financed by the world-bank was conducted over 18 months in Manaus, Brazil. Six mass trapping areas (areas where on average 60% of households received a Biogents suction trap for constant mosquito trapping) and six control areas (areas without trapping intervention) were selected in the same neighborhood. The mass trapping areas included a total of 734 houses, 444 of which accepted a Biogents suction trap for constant use, and the control areas comprised 753 houses. The effect of the intervention was monitored by installing 4 BG-Sentinel monitoring traps in all 6 intervention and all six control areas for 24 h once every two weeks.

Fig. 1: Comparison of mean numbers of collected female Aedes aegypti in monitoring traps in six mass trapping areas and six reference areas (areas without trapping intervention) before trap installation and during the first rainy season of the long-term study.

Unlu et a.. 2014: Multiyear Surveillance for Aedes albopictus with Biogents Sentinel Trap Counts for Males and Species Composition of Other Mosquito Species

40 to 50 BGS traps were utilized during an intensive 5-year surveillance as part of an ‘Area-wide Management Program for the Asian Tiger Mosquito’ in NJ, USA. The results are now published. The authors say that the Biogents Sentinel (BGS) trap is a very effective tool to monitor adult populations of Aedes albopictus and that although BGS traps are becoming the gold standard instrument for Ae. albopictus surveillance, they can also be used to collect other important mosquito species, which can enhance existing vector surveillance programs.

Read more about the results in the publication:
Unlu I.,  Farajollahi A. (2014) Multiyear Surveillance for Aedes albopictus with Biogents Sentinel Trap Counts for Males and Species Composition of Other Mosquito Species. Journal of the American Mosquito Control Association, 30(2):122-125.
DOI: http://dx.doi.org/10.2987/14-6401.1

Conclusion: The autors say that the BG trap showed a significantly better or similar performance compared to the CDC, EVS or MM trap with regard to trapping efficacy for most common mosquito species in Germany, including diversity of mosquito species and number of mosquitoes per trapping period. Thus, they say, the BG trap is probably the best solution for general monitoring or surveillance programs of adult mosquitoes in Central Europe.